Marvel at Small Town “Big Things” as you tour some of Alberta’s interesting roadside attractions.  Stand under the enormous Mallard Duck in Andrew, spot an alien on St. Paul’s UFO Landing Pad and learn the history of fur trader Angus Shaw and surveyor/map-maker Peter Fidler as you visit Bonnyville and Elk Point.

Edmonton to Andrew to St. Paul to Bonnyville to Elk Point to Edmonton

Begin your Day Tour as you depart Edmonton and travel to the village of Andrew, where you can take your picture with the World’s Largest Mallard Duck.  None can compare to this specimen’s 23-foot wingspan and happy demeanor.  Enjoy small-town charm and a drive down Ed Stelmach Avenue, named in honour of local resident and Alberta’s 13th Premier.

St. Paul welcomes visitors to home of the World’s First UFO Landing Pad, an “Out of This World” project built as part of the Canadian Centennial Celebration in 1967 and is waiting patiently for its first extra-terrestrial visitor! The large flat concrete structure contains a time capsule to be opened in 2067 on the 100-year anniversary.  Adjoining the pad is a rounded, saucer shaped Visitor Information Centre containing a museum of UFO memorabilia.

Continue on to Bonnyville, located in the heart of the Lakeland region.  Here you will find Canada’s Largest “Angus Shaw”, a historical figure and Scottish Explorer. The hand-carved wood statue stands 22 feet tall and symbolizes Shaw’s contribution to the fur trade in Western Canada.  He was the first European to come to the area in the mid-1700’s who founded a fort in Alberta’s east, leading to what would eventually become Bonnyville.

Make your way to the community of Elk Point to visit the 32-foot Peter Fidler chainsaw-carved wood statue that commemorates the bi-centennial of Elk Point in 1992 and the history of fur trading posts in the region. He was one of Canada’s greatest surveyors and one of the few men who laid the framework for all maps of Western Canada.

Conclude your day with fond memories of the featured roadside attractions and rich community history as you journey home.  Return to Edmonton at approximately 6:00 p.m. 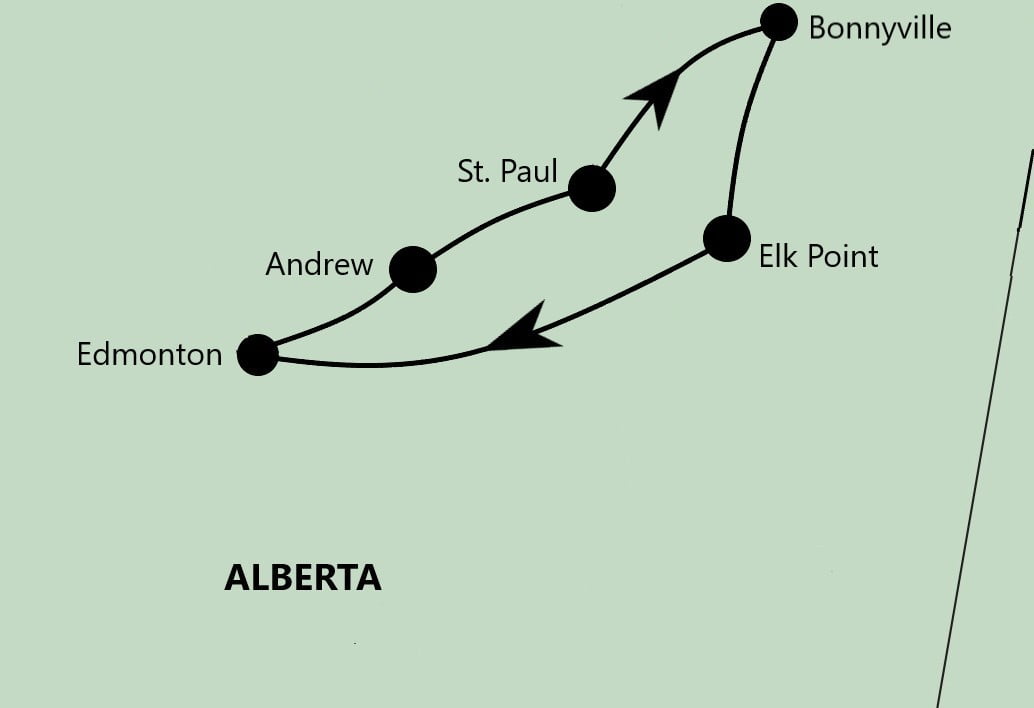