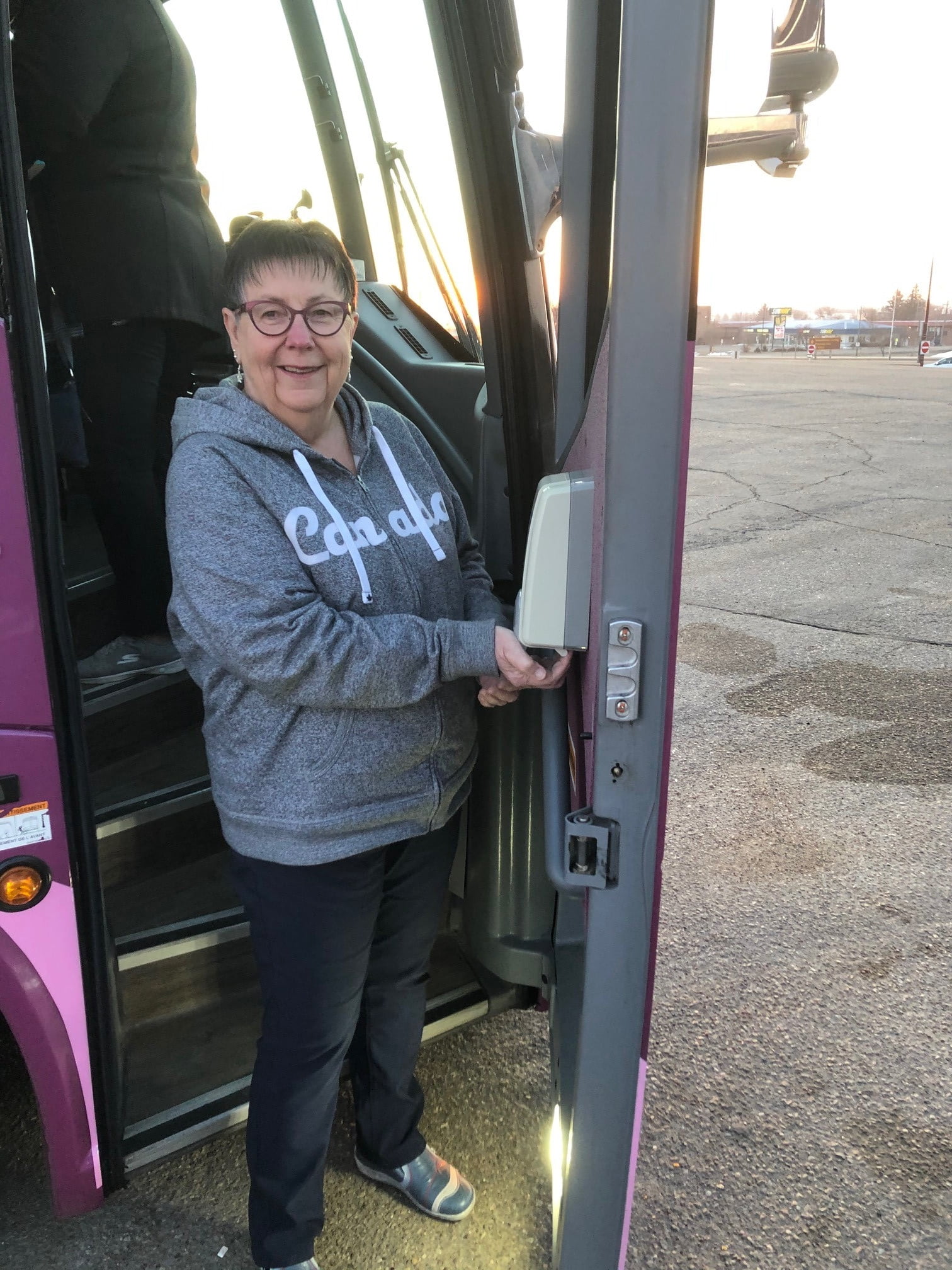 “Judy using the HAND SANITIZER machine on the bus”

This is a story I am thankful to share because all 50 of us on that Nagel Bus Tour
arrived home healthy and safe. And the story could have definitely had a
different ending due to the accelerated speed of the Coronavirus COVID-19 disease.

We were travelling to The Deep South – Texas & Louisiana. We (my traveling friend,
Penny and myself) had been planning this trip for almost a year and were looking forward to our
24 day holiday. Really, think about it…Texas & Louisiana and all the stops both before and after
reaching those states! We were well aware of the Coronavirus before we left on March 4, 2020
but weren’t apprehensive as there were no cases in Alberta and the USA had very few.
I joined the traveling gang in Ft. Macleod and the fun began. There was a lot of teasing
and laughter as the familiarity with each other grew. The first few days were travelling days and
when we arrived in Watertown, SD, we toured the Redlin Art Center. It’s a gallery and Terry
Redlin’s paintings all have a story that explain memorable experiences of his youth. Check it
out online and see what I saw. I’m sure you will enjoy it!

We still weren’t hearing a lot about the Coronavirus but the bus had a hand sanitizer
right on the door and we all sanitized before going on the bus and when we came off. And we
washed our hands often!  Down the road and we arrived at Oklahoma City, OK. We visited the
Oklahoma CityBombing Outdoor National Memorial. It was a dull and dreary day… fitting
for walking the  sacred grounds where 168 Americans were killed. It’s a very symbolic memorial
with a reflection pool where the bomb exploded and chairs for grave markers; large chairs for adults
and small chairs for the children. It was a somber bus ride as we carried on.

And then we arrived in Texas! I felt that I was having a dream. Texas! Really?!?! I
wanted to remember every moment. Our first stop was Fort Worth where we toured the
Stockyards Station and learned of its history. We saw with our own eyes Texas Longhorns. I
had no idea that those horns each weighed between 5 – 10 pounds.

We are still using hand sanitizer and washing our hands often but still hearing very little
about the virus and the info we did get was only about the USA; nothing about Canada. And we
carried on in beautiful weather – blue skies, no wind and warm/hot temps.

Our next stop was Dallas and I can’t put into words the emotions I felt hearing the story
of the JFK assassination while standing on Elm Street and seeing the two Xs marking the spots
where the shots hit. Later we toured the 6th floor of the Texas School Book Depository where
Oswald had hidden himself on the 6th floor behind book boxes in behind the window from where
he shot. The biggest surprise for me was the fact that there is no public memorial in that city
acknowledging this historical event. That night in our room we listened to news and started to
feel a little apprehensive about the increasing numbers in many of the states and seriously
began to feel our trip may get cut short because of it. But we kept going.

I very much enjoyed San Antonio. The Riverwalk, the boat cruise, the historic missions
and eating alligator!!! I really liked it. To me it has the texture of chicken breast and is very
bland so the seasonings are what’s needed to make it tasty. I would order it again. My memory
bank was getting full but I have my FB diary and pictures to revisit each day. Today we finally
heard some Canadian news… Sophie Trudeau tested positive for the coronavirus. Now it’s
feeling real! We’re continuing on…

On Friday, March 13, the text from my son Regan from Vancouver saying that UBC was
closed and all classes would be completed at home online told us how serious things were
getting. Wow!! That day family members from home were contacting their parents and
grandparents sharing their concern about their health and safety.

Things are starting to get serious! On Sunday, March 15 we got the news that all Alberta
schools were closed indefinitely. It was the day we were going to Houston. Our tour director
explained that the Houston Space Center had closed due to the virus, but all other tourist sites
were still open. We were half way through our trip. We were asked and decided as a group to
carry on with the trip. Three from our tour group decided in Houston to fly home. The next
morning our tour guide informed us that the Nagel office in Edmonton was ordering us home
after we did our swamp tour in Lafayette. It would take them a couple of days to get things
organized with motels as our schedule was changing and reservations would have to be made.
We were all healthy and felt safe and continued doing our part to sanitize. Many of us wiped
down our phones, ipads, remotes and counters in our motel rooms with Lysol wipes.
I was very excited about getting to Lafayette and our swamp tour. It’s just one of those
places that has stuck in my mind from novels I have read and have had the swamp as the
setting. I was not disappointed! Imagine the thrill of being able to say I was on a Louisiana
swamp where I saw an alligator in its natural habitat! It was a great finale to a great trip.
New Orleans would have to wait for another time.

It was March 17 and we were headed home. Our trip was cut short by 5 days and
everybody understood why, with the exception of one gal who was angry and expressed how
unfair it was that we wouldn’t get to New Orleans. I listened to her voice her opinion about all of
this for about 3 times when I had had enough. I told her funerals cost more than this trip! That
hit home as she was pleasant the rest of the trip!  And this is when things got real!!

As we travelled, the changes in just 11 days after our departure was at times almost
scary. We stopped at Walmart to pick up a lunch to have enroute. It was our introduction to
empty shelves. Restaurants were closing but some fed just us as they knew we were getting
desperate and we became very familiar with truck stops for our restroom breaks. We bonded
and accepted what was to come. We were all healthy and safe and felt blessed that we had an
exceptional tour guide and bus driver who kept us informed about what was going on at home
and that at this point there would be no problems at the border as the office had checked. What
a relief that was to hear!

Next stop Branson. We toured around town on our bus and saw the many venues for
the performing artists and then to a restaurant for a sit-down supper. We were their only guests
and our Cajun meal was delicious. I had my first taste of gumbo and real shrimp creole. I’d
recommend both!

And then we drove and drove and drove. Cracker Barrel, a favorite US restaurant, was
closed but opened up for us with reasonable rules. We were allowed in 10 at a time to place
our order, pay, use the restroom and return to the bus. Our tour guide delivered our meals to us
on the bus. We are now stopping at rest stops along the highway every couple of hours and our
supper tonight was ordered in for all of us… pizza and pop.

It’s Day 17 and we had our tour’s Farewell Dinner as tomorrow we would cross the
border and our 15 SK friends would be leaving us.

And now the border… We were through in half an hour and all they did was take our
passports and declaration forms and have us sign a form saying that we were aware that the
province was in a state of emergency and strict rules were in effect!

As we drove into Canada someone started the National Anthem… so emotional as only
we knew how relieved we were to get on Canadian soil during this pandemic.
We arrived in Swift Current and were told that we would get off the bus, go straight to our
rooms (outside entrances) and stay there until we boarded the bus the next morning. If we
didn’t adhere to these rules there would be a $2000 fine and we would be leaving the motel
immediately.

We were able to order supper and breakfast which were delivered to our outside doors
and we picked them up. It was great to get on the bus knowing our next stop was home!
My girlfriends drove my car to Ft. Macleod for me and I said good-bye to my “new”
friends and drove towards our beautiful snow-covered mountains and home!!
Surprisingly I’m finding my 14 days of quarantine not as tough as I thought as I have
hobbies to keep me busy and great friends who keep in touch.

Our world is forever changed but I am grateful that I was able to do the things I did
during the prelude to this COVID-19 disease. All 50 of us on the bus are still healthy and are
keeping ourselves quarantined. Sunday April 5 will feel like I’m turning in my Get Out of Jail
free card and will go into self-isolation and social distancing as everyone else is.