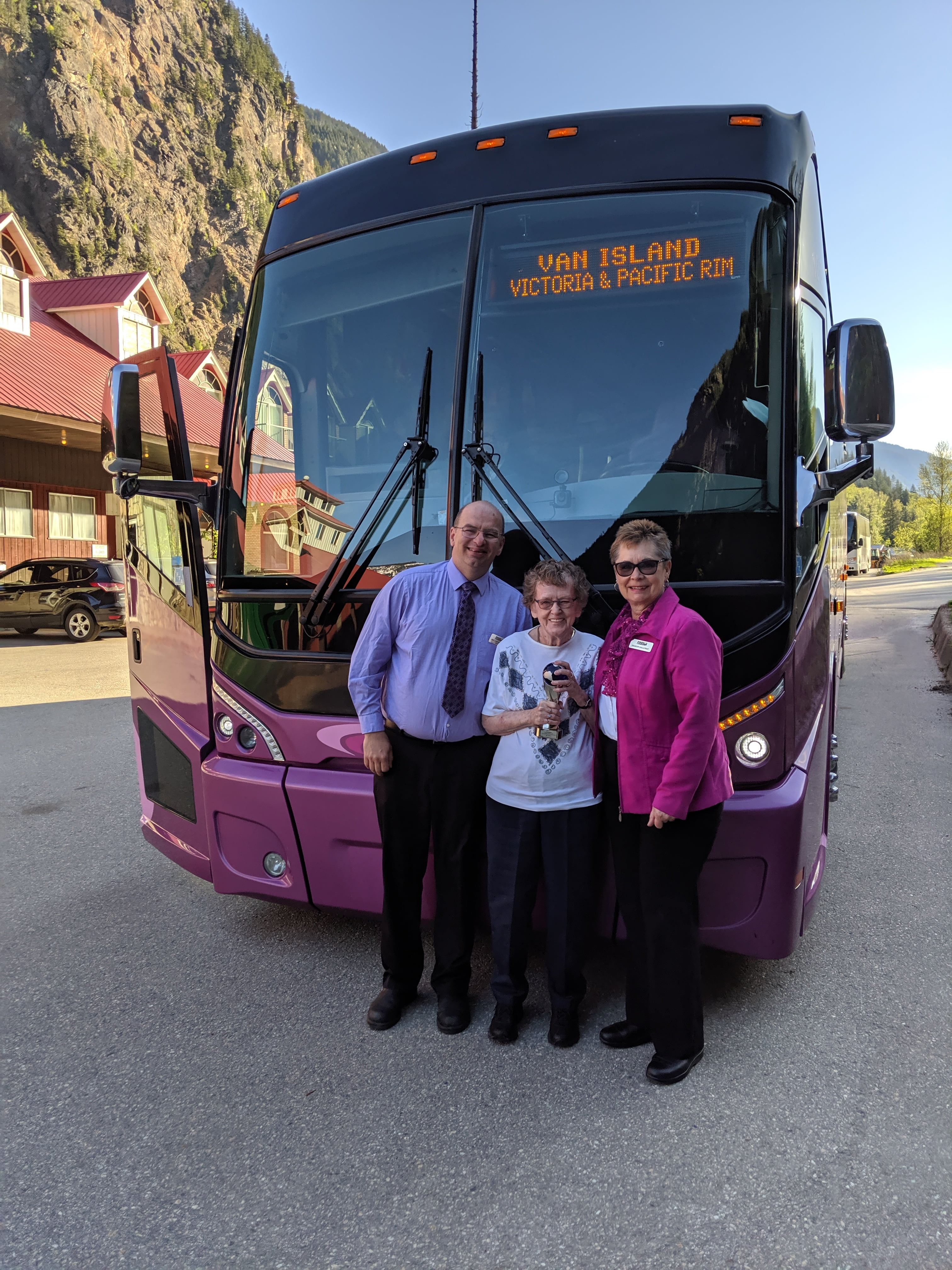 As I was boarding the bus, at my usual pick up spot
How many times have I done this was my thought
Tour guide had told passengers it was my 50th tour with Nagel
I was dubbed “Queen of Travel”, called Queen Vickie – quite a label

Countless times spent waiting arrival of the tour bus
Rotating seats, wearing seat belts without fuss
Stopping at well acquainted lunch and coffee stops along the way
Overnight stops in places I had overnighted before at end of day

Journeyed through the 280m long Great Bear snowshed on Coquihalla to Hope
Lunched in Chilliwack, had a time limit with which we had to cope
Passed Abbotsford, Langley, headed for Tsawwassen ferry terminal gate
As we sailed to Swartz Bay, my thought was how many ferry crossings have I done to date

Tour progressed down island, past Sydney, into Victoria, ‘City of Gardens’
Chateau Victoria awaited us, as it had many times before, their hospitality rates a ten
Butchart Gardens once again, offered Ross Fountain, flowers and colour, fantastic sight!
Fish and chips on Inner Harbour and Rogers Chocolates were a delight

Travelled up island over Malahat, stopping at a scenic lookout
Proceeded through towns to Duncan, ‘City of Totem Poles’ – unique no doubt
Chemainus boasts wall-size murals depicting its history, stretching near and far
Passed Nanaimo, the ‘Harbour City’, famous for bathtub races and Nanaimo bar

Parksville is called ‘Canada’s Riviera’, for its mild climate, grey powers rule
Coombs Old Country Market is famous for the goats on the rooftop – really cool
Say WOW! To the big trees at Cathedral Grove, Douglas firs 800-years-old
Highway #4 is Canada’s only paved road to the open Pacific Ocean – not tolled

Port Alberni is ‘Gateway to the Pacific Rim’, has a commercial fishing fleet
Tofino’s fascinating history is rich in Native culture, offers rugged beauty and is upbeat
In Tofino, some whale watched, others strolled through the little town
Still others stayed at the resort, beachcombing, while some tried to turn brown

Leaving Abbotsford ‘Raspberry Capital of Canada’, tour travelled hiway nine
Crossed Fraser River, through Mission, fantastic scenery, pastures and pine
Returned to Trans Canada, travelled into Hope, where tour had a coffee stop
Hope has extraordinary chainsaw carvings that we viewed, even one about a cop

Tour travelled Coquihalla to Kamloops where it lunched at Aberdeen Mall
Remainder of tour was travelled in reverse of westerly route – total recall
Stopped in Sicamous, at Dutchmen Dairy to enjoy homemade ice cream
Had a pix stop at Craigalachie, site of last spike driven of CPR’s dream

I was totally blown away, so unexpected, it is an awesome piece of art
I was speechless, but managed to say a thank you, given from my heart
Memorable photos of the presentation were taken of me and my jewel
I also received a Grand Diamond 50+ pin, special crafted, all pretty cool

Left Three Valley Chateau, travelled through Rogers Pass to Banff townsite
On a driving tour of Banff, the Banff Springs Hotel was seen, spectacular sight!
Lunched in Canmore, at a nostalgic place, someone kindly bought my lunch
Home going day, in Calgary the drop offs began, leaving the happy bunch

I was dropped off at my usual drop off spot, thinking how sweet it is to take
Reaching the goal I had planned for that sometimes I thought I wouldn’t make
Thank you Nagel for making my 50th tour SPECIAL, like having a piece of frosted chocolate cake