Totem Pole at the Haida Heritage Centre. Photo courtesy of Aboriginal Tourism Association of BC

Come along on an adventure of a lifetime!

Re-named from Queen Charlotte Islands in 2009, this group of almost 200 islands off the northwest coast of British Columbia will captivate you with its scenery, excite you with its history and calm you with its serenity.

You will be guests of the Haida people in their traditional homeland where they continue to live, their culture and way of life vibrant since time immemorial. This tour focuses not only on the Haida, but you will also learn about other Coastal nations including the Tsimshian, Gitxsan and Nisga’a peoples in our mainland explorations.

Your Haida Getaway begins as you are welcomed aboard your deluxe coach in Edmonton.  Majestic MOUNT ROBSON greets you as you travel west through JASPER NATIONAL PARK on your way to Prince George for your first night.

Enjoy the beautiful scenery this morning.  A highlight this afternoon is a visit to the ‘Ksan HISTORICAL VILLAGE AND CULTURAL MUSEUM at Hazelton prior to your arrival in Terrace for overnight. The ‘Gitxsan and Haida cultures are very similar. Tonight, enjoy a MEET and GREET with your travel companions.

Your morning travels take you to the interesting NISGA’A MEMORIAL LAVA BED PROVINCIAL PARK.  Return to Terrace for lunch prior to travelling a short distance for overnight in Prince Rupert, the gateway to BC’s beautiful north coast.

(4 nights). The MV NORTHERN ADVENTURE departs Prince Rupert this morning for a 7-hour scenic voyage through the COAST ISLANDS. Watch for whales as you cross the HECATE STRAIT to Queen Charlotte, your home for the next four nights.

Our sightseeing morning will take you to the arts community of TLELL with a visit to Crystal Cabin for an AGATE INFORMATIONAL TALK. Enjoy a picnic lunch as you explore the beach for agates at MISTY MEADOWS. This afternoon, a LOCAL GUIDE will take you through the HAIDA HERITAGE CENTRE, a world-class cultural complex built to look like the traditional Haida village that was once at this location. Here you will learn about the 14 clans of the Haida people.  Have your cameras ready for a picture stop at BALANCE ROCK when tides allow.

Today’s adventure takes you to the north end of Graham Island to a stop at MILE ZERO of the Yellowhead highway. In NAIKOON PROVINCIAL PARK visit HIELLEN RIVER.   You might choose to enjoy a short walk to the BLOWHOLE or go all the way to the top of the volcanic TOW HILL for a magnificent view. Visit the Haida Village of OLD MASSETT on the north coast to see the new totems, with time to browse the gift shop.  Tonight, you will be treated to a delicious and fun evening as a HAIDA FEAST is prepared by a Haida Chef with traditional local foods.

A full day of sightseeing is planned for today. We will make a stop at ST. MARY’S SPRING and JUNGLE BEACH, followed by a visit to the PORT CLEMENTS MUSEUM.  Travel a short distance to the GOLDEN SPRUCE TRAIL where some of the trees are over 500 years old!  Learn the story of the famous GOLDEN SPRUCE when you visit the remains.  Enjoy your last night on this beautiful island at your leisure.

This morning we say Háw’aa (thank you) and goodbye to beautiful Haida Gwaii as we board the FERRY for our trip to the mainland. Watch for last sightings of whales and enjoy the scenery as we make our way back across the Hecate Strait.

The morning allows time to visit downtown shops and the acclaimed MUSEUM OF NORTHERN BRITISH COLUMBIA. This afternoon drive to Port Edward, located on the Skeena River, to visit the NORTH PACIFIC CANNERY NATIONAL HISTORIC SITE. This site is the oldest surviving salmon cannery village along British Columbia’s coast. Established in 1889, the cannery was typical of those in remote locations in that it provided accommodation through the summer canning season. Little has changed since the plant closed in the late 1960’s. Almost 30 buildings linked by wooden boardwalks are open for viewing. Travel a short distance to Terrace for overnight.

Retrace your route back through north-central British Columbia to Prince George for overnight.  This evening we invite you to a HOSTED FAREWELL DINNER.

With fond memories of your Haida Gwaii visit, say farewell to your new-found friends as you arrive in Edmonton. 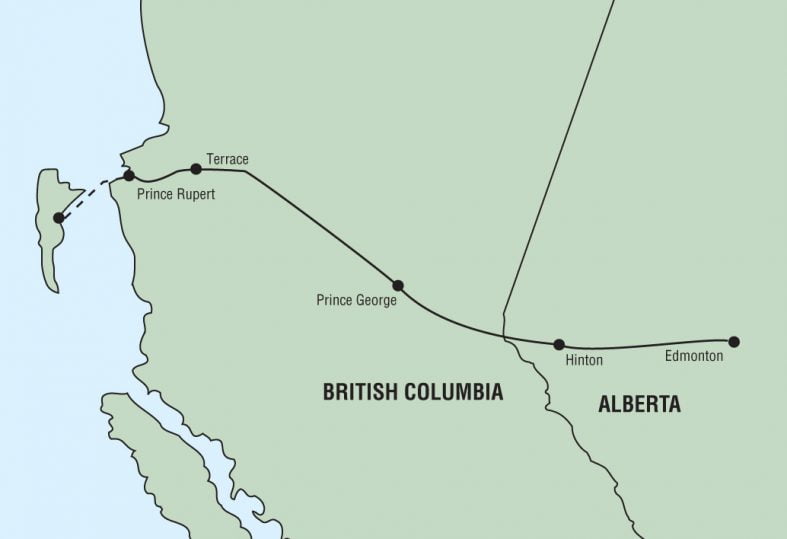 SIGHTSEEING:   Will require occasional walking on rugged and uneven terrain and travellers should therefore be in reasonably good health.

This very special program will be limited to 30 passengers per tour due to the nature of interpretive programs on Haida Gwaii.